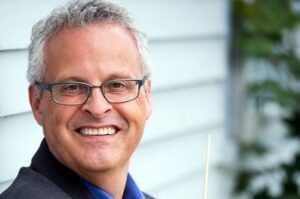 Gary Ewer is a composer, arranger, conductor and clinician. A native of Halifax, Nova Scotia, he has been a conductor of Symphony Nova Scotia’s Education Outreach program, bringing symphonic music to Halifax area schools. His choral and instrumental compositions and arrangements have been performed by The Elmer Isler Singers, Symphony Nova Scotia, Halifax Camerata Singers, and many other ensembles. He has an extensive background in choral conducting as director of Dalhousie University’s Collegium Cantorum, as well as former director of The Dalhousie Chorale and Chamber Choir. He has also most recently been a Senior Instructor of Music at Dalhousie, teaching aural skills, music theory, orchestration and choral techniques.

He is the author of “Easy Music Theory by Gary Ewer” – a self-directed video-based music theory program – and a suite of songwriting manuals that have been used in Nova Scotia’s secondary school music curriculum. Gary continues to be active as an adjudicator and clinician throughout Canada’s Maritime provinces, and has adjudicated at music festivals in Ontario and Alberta.

SA with piano – KH 007 – duration 3:15
SATB with piano – KH 006
This is beautiful folksong melody collected by Dr. Helen Creighton in Lunenberg County, Nova Scotia.  It is in 3/4 time telling the story of a sailor, his maiden, and the pain of separation.

This is a fun song for children – although any choir would have a great time singing the story. Some claim that the song has Canadian origins although one must ask how a crocodile could ever figure into Canadian imagery! A moose, maybe! Considering the size of this creature, it must be an allegory.

The crocodile, you see, was not of the common race,
For I had to get up a very tall pine for to look into his face,
LOOK & LISTEN

Go Tell it on the Mountain

The poetry of Bliss Carmen (1861-1929) has been the inspiration for many composers.
Live in friendship with the seasons,
And their skill will make thee whole.
Take the bird’s call and the brook’s note
for their tonic to the soul.

SATB with piano – KH 084 – duration 2:55
This folksong was collected by Dr. Helen Creighton in Nova Scotia. It tells the story of a young man, deeply in love with young Peggy Gordon, but his affections, to his great sadness, are not shared.
O Peggy Gordon, you are my darling
Come sit you down upon my knee
And tell to me the very reason
Why I am slighted so by thee

Sing the Winter Away

Oh, the winter frost is settling in
And I know the snows will soon begin
Into the air the leaves are swirled
The world goes ‘round – ‘round goes the world