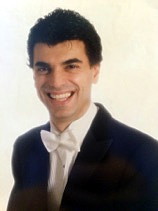 Estanislau Nogueira Gubiotti (Stan) was born in São Paulo, Brazil (1962).  He began his violin studies with private teachers and later enrolled at the Carlos Gomez Conservatory of Music in São Paulo. Mr. Gubiotti came to Canada and earned two Music Major degrees in Winnipeg, MB. In addition to being a violinist, Estanislau is a mandolin player, singer, and classical guitarist, teaching and free-lancing in chamber, and symphony capacities. Mr. Gubiotti has participated in numerous recordings and traveled extensively in North America, Europe and Brazil, utilizing his numerous musical abilities. Estanislau was the concert master for the Willingdon Church Orchestra near Vancouver, for almost 20 years and played for their Worship Band. He lives in Abbotsford, B.C. with his wife and three children.

This new Christmas composition sings itself! Intuitive voice leading helps choirs to get past the notes into the nuances of the text and lovely harmonies.  Stan wrote a beautiful instrumental feature for a solo instrument with piano (oboe, flute, clarinet or violin).

SATB with piano   –   CP 1435   – 3:25
SSAA with piano   –   CP 1526
One of the most relevant compositions we’ve had the pleasure of adding to our catalogue.  Stan is an immigrant to Canada, so this comes from a place of reflection and honesty. Provocative, thought provoking, somewhat disturbing and with heart – rendering beauty. Listen to the gorgeous recording.
bass guitar part available upon request (no charge)