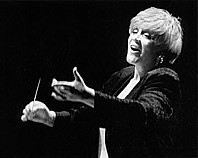 Diane Loomer (b. 1940) C.M. recipient of the Order of Canada, director and founder of Chor Leoni Men’s Choir, co-founder and conductor emerita of Elektra Women’s Choir, and most recently founder and conductor of EnChor, was internationally recognized as one of Canada’s leading musicians. Her choral compositions were published and recorded internationally, and she frequently appeared on CBC national radio as a spokesperson for the classical arts. She taught on the Music Faculty of the University of British Columbia. The first woman to conduct the National Youth Choir of Canada, Ms. Loomer received the Healey Willan Award in 1990 for her service to choral music in British Columbia; in 1994, she was named YWCA Vancouver’s Woman of Distinction for Arts and Culture; and in 1997 and 2004 received Distinguished Alumni Awards honoring her achievements. In 2002, she was awarded the Queen’s Golden Jubilee Medal for her significant contribution to Canada’s culture. The following year, Ms. Loomer was appointed by the University of Victoria to the University Women’s Scholar Lecture Series and in 2005 was appointed conductor emerita at Dalhousie University. In 2008 she was named a Paul Harris Fellow to the International Rotary Foundation for her tangible and significant assistance for furthering better understanding among peoples of the world, and in 2010 the Association of Canadian Choral Communities presented Diane with their Distinguished Service Award in recognition of her work promoting choral music in Canada. In 2011 Diane was the recipient of an honorary Doctorate of Letters degree from the University of British Columbia. She was the recipient of the Queen Elizabeth II Diamond Jubilee Medal and received an honorary Doctorate of Fine Arts from Gustavus Adolphus College in May 2012. Diane passed away December 10, 2012. Her husband, Dr. Dick Loomer, selected 15 of Diane’s favourite folksong arrangements.  To see the list, click here.

This arrangement based on “O Come, O Come Emmanuel” trades the familiar theme among all four voices, with each part taking its turn accompanying, yet it easily maintains the stylistic integrity of that beloved melody.
LOOK & LISTEN

SATB    –    CP 1003   – 3:00
Sonorous, intense a cappella interpretation of this moving spiritual. It contains brief solos for baritone and treble voices who understand this genre.

SATB   –    CP 1319
SSA   –   CP 1699
One of the very few folk songs from Canada’s frozen North. It’s the tale of the captain of a whaling ship who decides to push the late summer season to catch “one more whale”, but finds himself and his crew frozen in for the winter. Diane’s arrangement captures the mood of sailors who won’t see their home and families for another nine months, if at all.
LOOK & LISTEN

TBB with piano  –   CP 1678
Here’s to song, here’s to time;
Here’s to both with friends of mine;
Here’s to friends who raise their voices high.
Kings have riches widely lain,
Lords have land, but then again,
We have friends and song no wealth can buy.
LOOK & LISTEN

Loomer has solved the multiple-verse dilemma of this well-known Christmas carol by sailing the choir though the circle of fifths. Challenging but fun (and educational)!

This familiar Newfoundland folk song is set for unison treble voices with optional divisi and suggested colour accompaniment. Most appropriate for children’s choir but might also be a simple read and song for women.

by Diane Loomer – (sorry, no suitable recording available at this time)

Written for the Naramata Church Camp and based on Old One Hundred, this was specifically written to be used by SATB choir, youth/children’s choir, handbells, piano and/or organ or any combination!

When the Tide Goes Out

Diane Loomer and Amy Stephen have come up with a delightful arrangement of Brian Robertson’s great song. Your young choir will love singing about a feast on the beach, and about being “prepared to shuck the oyster, the clam, or the geoduck”. The “ughh” factor may add to the fun! Quite substantial solo work.