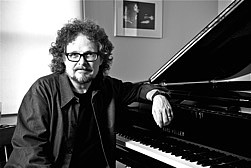 Born in Yorkton, Saskatchewan in 1952, David K. MacIntyre is a widely-performed composer based in Vancouver, Canada. Recognized in Canadian Who’s Who since 1992, he’s a prolific composer of opera, orchestral and choral works, art song, chamber music, instrumental theatre and collaborations in dance. His music has been performed across Canada and the United States as well as thirty countries in Europe, Asia and South America. In a career spanning nearly fifty years, he’s been commissioned by dozens of producers to create original works for their artists including Vancouver Opera, First New York International Festival of the Arts, CBC Radio Orchestra, Vancouver Chamber Choir, Dance Theatre Workshop (New York), New Music America (Montreal), Belle Canto Women’s Ensemble (Edmonton), Elektra Women’s Choir (Vancouver), Purcell String Quartet (Vancouver), Le Groupe de la Place Royale (Ottawa), and Turning Point Ensemble (Vancouver), among others. In 1979, he accepted an invitation to join the faculty of the School for the Contemporary Arts at Simon Fraser University in Vancouver where he co-founded and co-designed the program in music composition. He was a Professor in this unique, interdisciplinary composition program for 38 years. He retired from SFU in 2017 as Professor Emeritus to devote his full energies to writing music. He lives in Vancouver with his wife Catherine Josephine Lubinsky, a former dancer turned clothing designer and he lives in gratitude for his good fortune.

SSSAAA  a cappella – CP 1024 – duration 3:00
Written for Elektra Women’s Choir, this piece is now heard around the world. Using only the words Ave Maria this rhythmic and visionary work is suitable for women’s or very advanced children’s choir.

SSSAA  a cappella – CP 1188 – duration 3:20
Alleluia is the long-awaited sister work to David MacIntyre’s Ave Maria* (1994) which has enjoyed continuous and regular performances around the world by fine women’s choirs – and some extraordinary children’s choirs, too. Like its sister work, Alleluia dances over compelling harmonies, undulating phrases, and syncopated rhythms. Alleluia, a word that has captured humanity’s imagination for millennia, is at the centre of this celebratory meditation on joy.

SATB  a cappella – CP 1198 – duration 3:20
TTBB a cappella – CP 1220
The quintessential Remembrance Day poem is set beautifully By David. “In Flanders Fields the poppies grow between the crosses, row on row”.

LOVE IN PUBLIC - The Choral Suite

SATB  with piano – CP 1883 – duration 31:00
Love in Public is the provocative title for an opera MacIntyre wrote on forty-four dramatic love poems by Elizabeth Barrett Browning  – created during her courtship with Robert Browning in 1845-46 and published under the purposely-misleading title “Sonnets from the Portuguese”, hoping the title would throw readers off the scent of a real-life romance.

The story begins when a man writes a letter to a woman: “I love your verses with all my heart, dear Miss Barrett. I do.” he writes in an overture. “And I love you, too.” His words send Elizabeth reeling! Isolated, mature, and living in suffocating conditions, she thought her future was hopeless but she is suddenly revivified from the edge of death by the power of Robert’s love, an event she describes dramatically in Sonnet 1. From then on, we are led without fear into the confines of an intimate relationship. Twelve expressions of love pour through the elegant majesty of Elizabeth’s words.

Beloved, Say Again - from LOVE IN PUBLIC - The Choral Suite

How Do i Love Thee? - from LOVE IN PUBLIC - The Choral Suite

Beloved, Thou Hast Brought Me Many Flowers - from LOVE IN PUBLIC - The Choral Suite