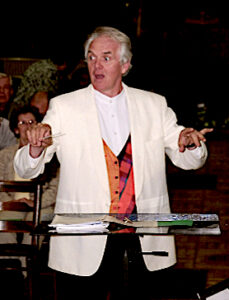 David Machell (b. 1953) was a Choral Scholar at St Catharine’s College, Cambridge, and has worked as a composer and conductor in the choral field ever since. His anthem “Hallelujah, your kingdom come” (publ. OUP) was a winner at the 1988 Songs of Praise Festival. A series of cantatas were commissioned by the Nottingham Choral Trust (later Music for Everyone), notably “Imaginary Menagerie” with texts by Roger McGough. “A Tree there grew in Galilee” was published by Stainer and Bell, with many subsequent works for choir and organ being published by Kevin Mayhew. A performance of his Introit “Gloria” by the Cavendish Singers at Westminster Abbey was followed by a performance of an expanded “Gloria” by Paul Hale and the Nottingham Bach Society. “Mass: Mother and Child” and “A Celebration of Psalms” were premiered shortly after. A commission followed from Music:Link of Lincoln for “Famous Lincolnshire”, premiered at Lincoln Cathedral. His Horn Concerto was first performed by the Nottingham Symphony Orchestra by Robert Parker, who also showcased his “Joyful: Horn Sonata” at the Southwell Music Festival in 2019. A series of works followed for Incanto Phoenix Chamber Choir of Nottingham, notably a setting of Hildegard von Bingen’s “Columba aspexit”. During lockdown many acousmatic works were added to his Youtube channel (david machell channel). A blochbuster arrangement of his “Amazing Grace” can be found there, recorded by the English Trombone Consort. Contemporary works written for CoMA East Midlands can be found on his soundcloud channel (david machell composer), His “Autumn” Sonata for viola and piano was first performed by Andrew Chadwick in 2021, and further works can be heard at his concert series “Music at St Mary’s Lowdham” in coming months.

Today the Christ is Born

This piece has a stately splendour intended for a resonant acoustic. The Latin lyrics need to be distant and rather veiled, with the English lyrics clear and well enunciated. The piece as a whole should be timeless and meditative rather than dramatic. Staggered breathing is essential for the sustaining of very long notes. The solo phrases — for solo or semi-chorus — may be freely divided between choir members as required, at the appropriate octave.