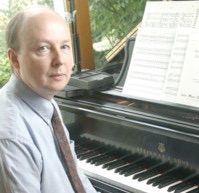 D. Geoffrey Bell is a Canadian composer whose works have been performed and published internationally. His music has been heard in concert and on radio and television, including a special half-hour performance of his Missa Brevis on CBC Radio 2, Canada’s national radio network. His choral music has been selected for many music festivals and music libraries in Canada and the United States. His music has received many awards, including awards from Alberta Culture and the University of Calgary.

He has appeared as a guest-speaker for audiences in Edmonton, Jasper, Kananaskis and Calgary and has published an article regarding his work as a composer and advocate for Canadian music. A second article entitled, “Canadian Culture; Why Bother?” was presented at the Calgary City Teachers’ Convention.

Fourteen of his choral works have been published. His complete catalogue includes instrumental solos, music for ensembles and choral scores. He is currently working on a number of compositions including new choral works, an orchestral sketch and film soundtrack samples. Performing rights for his works are administered by SOCAN.

This famous Newfoundland folksong is given a lovely setting by Geoffrey.  The flute part really makes the swallow fly high – despite the mournful sentiment of brokenhearted love. This piece has been set by many composers and this is surely one of the best arrangements. Give a listen!

SSA with piano and flute  –   CP 1116   – 1:40
Water Garden, Stone Garden, and Reflecting Pool are the titles of the three poems, penned by the composer. The voices are complemented by piano and flute in describing the settings and the feeling of the Haiku, very much evoking a calm and serene “Japanese” garden.