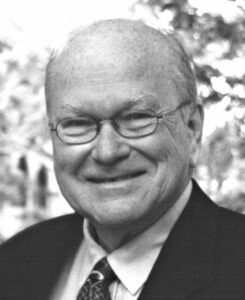 D. Bruce Snell was a graduate of the Faculty of Music, University of Toronto and Columbia University, New York. He taught music at Oakwood Collegiate and Humberside Collegiate before becoming a secondary school principal, then senior superintendent with the Toronto Board of Education. He is co-author of the music textbook “For Young Musicians” which is widely used in Ontario schools. After retiring from his position as Associate Director of Education, he became an assistant conductor and resident arranger for the Toronto Choristers, a community-based choir for whom this arrangement was originally conceived.

Bruce passed away in 2008. One of his students gave this testimonial: “I wish to express my deep sadness at the loss of a great teacher, my music teacher, Bruce Snell. We were fortunate to have Mr. Snell at Humberside C.I. in the 60’s and to watch the music program there grow and flourish under his guidance. I can remember being in his classes and respecting the care and precision he wanted all of us to achieve in becoming good musicians. He produced concert level orchestras at Humberside, making and recording LP’s and taking us to play at venues outside the school. The orchestra practices after school at Humberside were positive, learning experiences and I enjoyed all five years working with Mr. Snell and his music. I believe that I became a high school teacher because of his influence and I shall never forget the impact he had on my life!”

Through all the world below,
God is seen all around;
Search hills and valleys through,
There He’s found.
The growing of the corn,
The lily and the thorn,
The pleasant and forlorn,
All declare God is there,
In the meadows dressed in green,
God is seen.