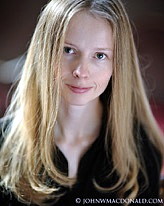 Christine Donkin (b. 1976) was born into a musically active family in northwest Alberta. Her approach to music composition is influenced in part by the wide range of styles and forms to which she was introduced in childhood: folk, fiddle, jazz, classical, romantic, and much more. Christine studied music composition at the University of Alberta and University of British Columbia and now composes choral, chamber, and orchestral works which are performed across the continent and beyond, including such prestigious locations as Carnegie Hall, the Moscow Conservatory, and the National Centre for the Performing Arts in Mumbai. She has won awards at national and international composition competitions, and six companies publish her music.

Christine is active in the field of music education as a teacher, adjudicator, clinician, and arranger. Several of her pedagogical compositions, along with over seventy arrangements and figured bass realizations, appear in the Royal Conservatory of Music publications for piano, voice, violin, viola, cello, clarinet, saxophone, and trumpet. The repertoire books of Trinity College London and the Australian Music Examinations Board also feature her music.”

Dawn is not Distant, the

SSAA with piano  –  CP 1302   – duration 4:15
The Dawn is Not Distant joins fragments of text from two very different sources: the Latin translation of Genesis chapter 15 and Tales of a Wayside Inn by Henry Wadsworth Longfellow. When read together out of their original context, a new meaning is created.

Around the time that I began writing this piece, I was thinking about earlier times of my life, and in particular one event that left me heartbroken. The Dawn is Not Distant contains the message of hope and optimism that I would convey to my former self if I were able to travel back in time.  C.D.

This Fragile Web - the Trilogy

SATB with piano – CP 1606   – duration 8:05
This Fragile Web – the Trilogy – was commissioned by Ardelle Ries, director of The Augustana Choir in Camrose, AB, and was premiered in April 2014. It is a setting of three poems by Canadian poet E. Pauline Johnson (1861-1913). Johnson’s delicate, intimate poems (inscribed “to one beyond the seas”) make frequent connections between music and nature, which I have tried to echo in this setting.