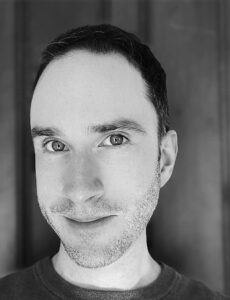 At the age of four, Chris Fortin began improvising at the piano and hasn’t stopped since, performing, composing and arranging in styles from Classical and Jazz to Pop and Rock. After studying at Westminster Choir College in Princeton, Chris pursued a career in sacred music, and has directed and created music experiences in New Jersey area churches for over two decades. Chris is the director of music and organist at the Basking Ridge Presbyterian Church, and also remains an active teacher, singer, and sought-after accompanist in the region. Chris resides with his husband and their three cats in the little town of Mount Tabor, NJ.

Angels in the Snow

Snow minted branches bowed to us through frosted light
A raven welcomed us and led us through a world of white
A meadow glistened, we wonder-watched what we were shown
And, christening the fields, the only footsteps were our own