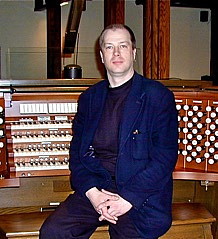 Bryn Nixon received his early musical training as a boy chorister at All Saints Anglican Church, Winnipeg. Bryn studied piano, organ and voice with Donald Hadfield at All Saints’ and continued organ studies with Conrad Grimes at the University of Manitoba. In 1983 Bryn moved to Vancouver to study with Patrick Wedd in the apprentice position of Assistant Organist at Christ Church Cathedral. Bryn has been the Director of Music at Ryerson United Church since 1989 and facilitates a wide and varied music program for the congregation of Ryerson. The chamber choir sized Chancel Choir has performed Handel’s Messiah with the CBC Radio Orchestra and with the Pacific Baroque Orchestra has performed Handel’s Dixit Dominus. In 1996 the Chancel Choir gave the Vancouver premiere performance of Arvo Part’s St. John Passion. Bryn maintains a busy performance schedule and has recorded with Christopher Robertson, The Vancouver Chamber Choir, CBC Radio Orchestra, Elektra Women’s Choir, The Vancouver Cantata Singers and numerous CBC Radio broadcasts.

SATB a cappella – CP 1953   – duration 2:45
Using the first verse of this Wesley hymn, Nixon arranges the text so that, for each of the two sections, a soloist (supported by the choir underneath) sings out the text first, followed by a reiteration from the choir – with chords and movement slightly varied from the soloist’s section. A beautiful prayer.

Lead me forth.
Lead me in thy righteousness.
Make Thy way plain before my face.

For it is thou, God, thou, God,
only that makest me dwell in safety.

SATB with Organ – CP 1134   – duration 2:45
Bryn Nixon wrote this chant-like processional for his church choir. It is imaginative and accessible for most church and community choirs – appropriate for church services and/or concerts