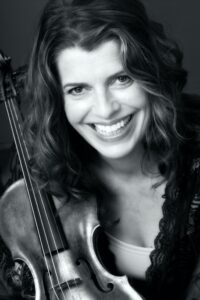 Anne Lindsay has established herself as one of the most engaging and versatile instrumentalists in Canada. She has four award winning CDs of her own compositions and has been named Jazz Violinist of the Year (National Jazz Awards) and Solo Instrumentalist and Producer of the Year (Canadian Folk Music Awards).

Anne has played on hundreds of recordings and is a featured performer with Jim Cuddy, Blue Rodeo, The Skydiggers and John McDermott. She was the resident fiddler for the Toronto Maple Leafs, the stage production of The Lord of the Rings and is an exuberant fireplug of a session-player-to-the-stars (Led Zeppelin, The Chieftains, Blue Rodeo, James Taylor, Roger Daltrey).

Anne’s choral arrangements have been performed and recorded by Cantores Celestes and the Canadian Celtic Choir.

SATB a cappella – CP 1979 – 4:50
Rain drops, green water- clouds drape the trees
Whisting through the green days
White ribbons tumble through hemlock and spruce
In salmon days.
Everything dripping, rain to the bone
Rain to the bone of this thing
Golden creek rushing- green moss hanging
In salmon days.