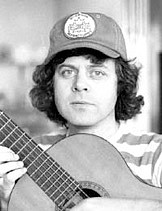 Allister MacGillivray: renowned songwriter, guitarist, record producer, folklorist and author from the Island of Cape Breton in the province of Nova Scotia, in eastern Canada.

He was born and raised in the coal-mining/fishing town of Glace Bay. His grandparents on the MacGillivray side were Gaelic-speaking, and various cousins played violin, guitar or accordion at weekly family-music-sessions — before the intrusion of television. A child performer from the age of seven, he met many of the stars of Cape Breton’s musical community while touring variety shows. In addition to this exposure to traditional and popular music, he was recruited by boy choirs, and studied and sang Gregorian chant. Allister became enthralled with British and American folk-music at the age of thirteen, and from then on performed only with folk-oriented bands.
During his university years, he worked and recorded in Kansas City, Missouri, with a group from The Dutch East Indies. Following graduation from St. F.X U. in Antigonish, he toured two years with a trio headed by Cape Breton folksinger John Allan Cameron. Besides its own dedicated following, the group opened for Anne Murray and The Irish Rovers, bringing the house down in a 1970 appearance at “The Grand Ole Opry” in Nashville, Tennessee. On “Ceilidh”, Cameron’s Canadian national television program, Allister served as guitarist and musical director.

During the mid seventies, Allister performed as a full-time guitarist with the Irish/Newfoundland group Ryan’s Fancy, which toured Canada and Ireland. He recorded and co-produced several albums with this trio, and again was musical director on both regional and national television programs. At this point his songwriting career began to blossom. Ryan’s Fancy recorded Allister’s “Sea People”, “Tie Me Down” and “Coal Town Road”, and the group featured “Song For The Mira” during many of their live performances. A particular highlight of Allister’s performing career was accompanying Irish superstars Tommy Makem & Liam Clancy, in television series and several extended tours of the eastern United States and Canada. Allister left “the road” around 1980, choosing to settle in rural Cape Breton to concentrate on an eclectic career of songwriting, composing and documenting the Cape Breton experience. During the last several years, Allister has worked as researcher and artistic director on a series of short films on the Cape Breton style of traditional Scottish fiddling (see the Highland Legacy DVD), and continued his intuitive songwriting.

Among honours Allister has received:

• •The province of Nova Scotia “for the gift of music and promoting Celtic culture”
• •The Cape Breton Tourist Association “for writing beautiful songs which promote the traditions, the culture and the heritage of Cape Breton”.
• •Official Bard of Clan MacGillivray, Canada
• •Honorary Doctorate of Letters from The University College of Cape Breton, May 1997

TBB with piano  –   CP 1678
Here’s to song, here’s to time;
Here’s to both with friends of mine;
Here’s to friends who raise their voices high.
Kings have riches widely lain,
Lords have land, but then again,
We have friends and song no wealth can buy.

Song for the Mira

One of Canada’s most enduring and endearing folk songs, Song for the Mira has been covered over 300 times. Anne Murray says it’s one of her favourites. So composer Smith applied all of his skills and passion to this one.