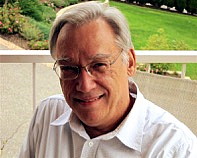 Albert McLane has a bachelor’s degree in music theory and composition, and master’s and doctoral degrees in conducting. His conducting experience includes work with choral, liturgical, operatic, orchestral, and symphonic wind ensemble repertoire. He was a Participant in the Conducting Master Class at the 2001 Oregon Bach Festival, studying with Helmuth Rilling and conducting in the Discovery Series of the festival. For twelve seasons he was Music Director of The Gallery Singers, an early music chamber choir in Vancouver. During that time he edited a large number of 16th century and early 17th century works from library collections, and also arranged a number of traditional songs for the choir’s concerts.

Albert is also an Anglican priest, and is currently living in Kelowna, BC.

Down by the Sally Garden

The much loved Irish folk-song in a new and heartfelt arrangement for SATB choir with a “Treble Instrument” (such as flute, penny-whistle, or violin) that provides the hint of a solitary Celtic player accompanying the voices.